Every week I email a gardening question to the panel of experts at BBC Radio Norfolk’s The Garden Party and then eagerly listen to the programme the following day, scribbling down the gems of information they kindly offer. Sometimes Laila sends a question or two as well. This is a transcript of the advice that The Garden Party experts gave us on this week’s gardening challenge!

We have just got back from spending a few days with Laila in the Belgian Ardennes to find our new dahlias well and truly in flower. This should have been a magical moment if it wasn’t for the fact that something’s been eating the petals. What do you think it is please and is there anything I can do to prevent it happening again? We’ve got loads more in bud and I was looking forward to using them as cut flowers…

IAN: I would say earwig damage early on at the opening-bud stage, as the petals develop.

JOE: Earwigs can be terrible on dahlias and on fruit actually …on peaches for example.  We put on the walls where the peaches grow, canes and terracotta pots stuffed with straw (they don’t have to be terracotta but terracotta always looks nicer) and the earwigs – which are nocturnal feeders go up into the straw during the day thinking they’re safe and then you come along and empty them out and dispose of them. I’ve noticed a lot of earwig damage this year (Ian agrees) – in fact a lot of pest damage in general, because of the mild winter.

IAN: It can be quite devastating for dahlias because I’ve noticed on several plants as much as two  thirds of the blooms on any one plant can be damaged, mainly while the flowers are in bud.

JOE: Keep dead heading because they’re repeat flowering and they should keep going through till October or even November if we get a mild autumn.

IAN: …and Dahlias are supremely back in fashion. In fact Joe and I were both talking earlier about how we really want to grow more…

JOE: As head gardener at Raveningham Hall, it’s traditional to grow a lot of house flowers but interestingly, a few years ago, dahlias  and chrysanthemums were banned from the house as funeral flowers…

IAN: …but are now the height of fashion, darling!

THUNDERFAIRY: I’ve always avoided growing them because I felt there was a lot of faff involved in the lifting of the tubers but Ian, you said you don’t bother?

JOE: I generally leave them in the ground unless they’re in a particularly cold spot or a cold part of the country and give them a really good mulch to protect them from frost. Meanwhile, I always lift just one or two as a back up. Personally I don’t store them dry like you’re supposed (not that there’s anything wrong with that) but instead pot them up, stick them in a polytunnel or a cold green house, bring the shoots on nice and early (you don’t need extra heat) and take basal cuttings. So when the shoots start to come through get your knife and cut the shoot and lift with a little bit of the base plate of the plant – it takes a little bit of practice – sometimes you just get the soft sappy shoot which won’t root. Then all you need to do is get some perlite or grit in a pot in a drip tray of water , stick them in and they’ll root in seven days! Taking basal cuttings from dahlias and delphiniums come to that is the easiest thing in the world! 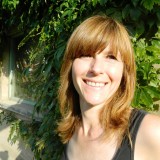 Up until five years ago I had no experience of growing vegetables other than encouraging my young children at the time to take an interest in GYO for a couple of years – mainly in an effort to get them out of the house and into the fresh air.

Thankfully my Dahlias don’t have the damage yours have Bridget but I found this interesting because I’d thought you were supposed to lift them for the winter too. I don’t do anything with mine (I did say I’m a beginner gardener) I don’t even cover them and each year they delight me with their pretty colours. Also I’d never thought to use them as cut flowers either so thank you for another interesting post.

Thanks for the comment – I’m glad you found it interesting! I’m a novice dahlia grower (this is my first time) but in spite of a shaky start – I initially planted them much too deep then the earwigs invaded – they’re looking lovely now and are well worth all the effort!