As I parked my car on the drive the other day and opened my door to get out, I noticed a very unusual plant growing partially beneath our leylandii hedge (please note that we didn’t plant this hedge, it was here when we moved in and we keep it trimmed and very much under control). 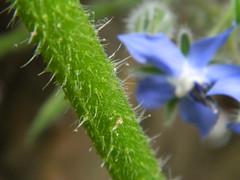 Back to the mystery plant. What surprised me initially was that it was clearly thriving in a tinder dry and shady spot where virtually nothing else grows except the odd dandylion! It’s stems were long, fuzzy and admittedly gangly, so not necessarily the most conventionally attractive plant in the garden but the mass of blue flowers on it were exquisite. I’d never seen anything like it!

As soon as I got in the house I got on the internet and identified it as Blue Borage. I felt thrilled and honoured that it had chosen the Villas to put down its roots! I went on to discover the following fascinating facts about the plant: 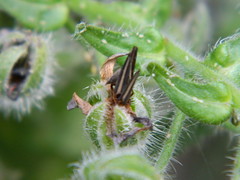 It can be used either as a fresh vegetable or as a dried herb. As a fresh vegetable, borage with its cucumber-like taste, is often used in salads, in Pimms or as a garnish. The flower has a sweet honey-like taste and as one of the few truly blue-coloured edible substances is often candied and used to decorate cakes and desserts. Apparently every part of the plant except the root is edible, although the leaves are best eaten young and tender. It can also be used in companion planting.  They say it helps protect legumes, spinach, brassicas, and even strawberries… 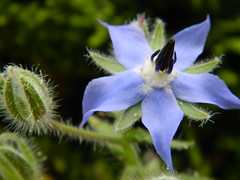 In addition, borage holds medicinal properties and Naturopathic practitioners use it  for regulating the metabolism and the hormonal system, considering it to be a good remedy for PMS and the hot flush! Borage can also be used to alleviate and heal colds, bronchitis, and respiratory infections, and in general for its anti inflammatory properties – the flowers can be prepared in infusion.

And all from a plant that turned up unexpected and uninvited – but most welcome – under our hedge! Apparently it self-seeds liberally so I plan to have lots more Borage dotted around the place over the next few months… woot!

7 thoughts on “Borage makes a surprise entrance at the Villas…”

The store is still in development. Errors may occur. Please let us know if this happens via laila@sowandso.com Dismiss